Handpainted sign done by Rose Langdon, with in progress violins

Two Instruments being built are nearing the completion stage as most of the material has been formed to its final shape, before being assembled, finessed, then successfully varnished and set up. Violin is not available. The Viola is still unspoken for.

With the corpus of the instrument now assembled and the scroll carved. I’m getting ready to prepare the neck for installation on a violin model that is already spoken for. I used this model for my last commission with great success. Differences in this one include an ebony cap emulating an artistic repair commonly seen on older instruments of great value.

The rib structure garland receives some inside trimming before installing the linings and gluing to the back and belly.

Scraping away at a violin scroll for the latest commissioned instrument. 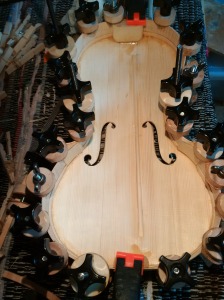 Top glued to the ribs

A little bit further behind progress wise is a new viola, designed around playability and responsiveness for players with smaller hands/frames that still demand a powerful sound. The upper treble side shoulder of this viola has been made smaller to make getting around the instrument easier. This is my first instrument to feature doubled (inlaid) purfling. I used it to draw attention to the smaller treble side, to trick the eye from focusing on the non-symmetrical shape of the outline. 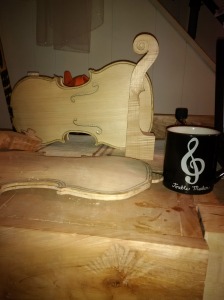 Measuring using the same trusty tape the viola currently shapes up in the following dimensions.The arch goes almost completely to the edge which is to be turned and shaped during/after the installation of the rib structure.

All instruments come fully set up, in a case with a bow. Featured violins are full size 4/4. Fractional sizes also available.

An impressive entry level instrument, with great response. Currently only have 1 available but will definitely be getting more in. Setup with Vision Strings, date wood fittings and Wittner tailpiece. Yes, that is a real ebony fingerboard! 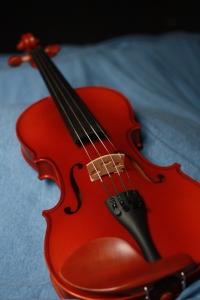 One of the most impressive instruments I’ve seen in this price range. Antiqued varnish and boxwood fittings, a great sounding violin with decent projection. Comes with ViolinO strings, and Wittner tailpiece.

Similar to the previous violin there’s just more sound and better fittings also a better case and bow. Dominant strings with a Lenzner Goldbrokat “e”, Boxwood fittings. Pernambuco bow. Used as a practice violin by my sister for a week while travelling to Great Britain.

This handmade, modern instrument is available for sale, and a real bargain when compared with new commissions. The scroll was initially carved while I was studying at the Violin Making School of America; the one piece maple back is cut on the slab, and fair in terms of figure. The top is the first top is very fine grained sitka spruce.  The instrument took form over the years as a secondary project, while I was engaged with restorations and repairs of customer’s instruments and neared completion of my corner-less model viola.  However, this is not to say that it was second in terms of effort, but rather a place where I allowed myself freedom to experiment with acoustic design.  The end result is a wider bodied violin that favours the richer lower register, almost emulating the viola in terms of voicing, it may be used as a model in the future for the creation of a five string violin.

*The beginning of the end; my violin sun-tanning in my mother’s backyard

*The “ff” holes have more slant than most of my other instruments: Above is the initial sawing of them.

Photo taken just before leaving to play with the symphony of the kootenays http://sotk.ca/

The violin has been played regularly and its tone continues to develop and improve; I used it for one of my performances with the Symphony of the Kootenays.

It has a quick response and there has been tried with different strings, bows and even fittings. It’s current setup includes; rose wood fittings, perfection pegs, Evah Pirazzi strings with Goldbrokat (by Lenzner) “e”.

Feel free to call ahead to book an appointment outside open hours.

The latest news from the shop… 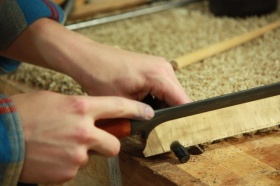 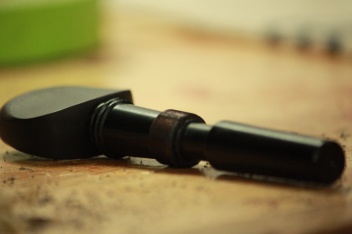 Photo Gallery: A Very Young Violin gets a coat of finish. 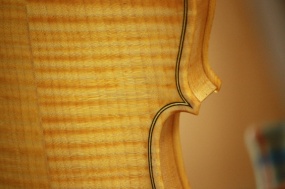 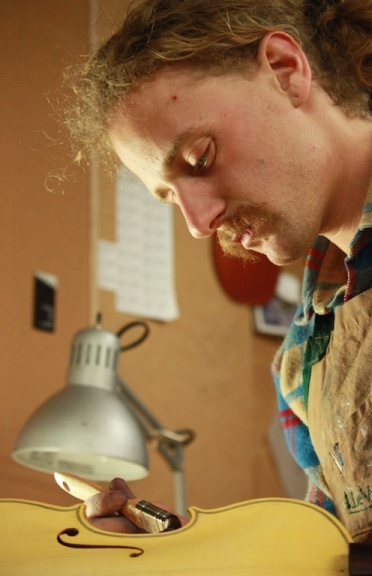 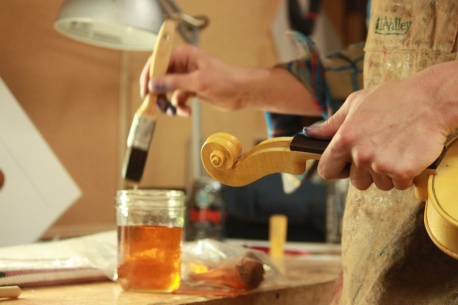